COVID-19 and SARS-CoV-2 update from Immunopaedia.org.za.

Disclaimer: This is a summary of an article that is in a preprint and has not been certified by peer review.

Although SARS-CoV-2 shares 96.2% identity at the nucleotide level with the coronavirus RaTG13, which was detected in horseshoe bats (Rhinolophus spp) in Yunnan province (1), it has not previously been detected in humans or other animals. The emerging situation raises many urgent questions. Could the widely disseminated viruses transmit to other animal species, which then become reservoirs of infection?

The SARS-CoV-2 infection has a wide clinical spectrum in humans, from mild infection to death, but how does the virus behave in other animals? As efforts are made for vaccine and antiviral drug development, which animal(s) can be used most precisely to model the efficacy of such control measures in humans? To address these questions, Shi et al., evaluated the susceptibility of different model laboratory animals, as well as companion and domestic animals to SARS-CoV-2 (2). Ferrets are commonly used as an animal model for respiratory viruses that infected humans, therefore they tested the susceptibility of SARS-CoV-2 in ferrets.(3)

Ferrets were inoculated intranasally with the virus. Viral RNA and infectious virus were detected in the nasal turbinate, soft palate, and tonsils of all four ferrets inoculated with the virus, but was not detected in any other organs tested. These results indicate that SARS-CoV-2 can replicate in the upper respiratory tract of ferrets, but its replication in other organs is undetectable.

The authors suggested that the SARS-CoV-2 can replicate in the upper respiratory tract of ferrets for up to eight days, without causing severe disease or death. And their results indicate that SARS-CoV-2 can replicate efficiently in cats, with younger cats being more permissive and, perhaps more importantly, the virus can transmit between cats via respiratory droplets. (Also read article on SARS-CoV-2 infection of a Tiger in the NY Zoo)

Shi et al., investigated the replication and transmission of SARS-CoV-2 in dogs and they were intranasally inoculated with the virus. Oropharyngeal and rectal swabs from each beagle were then collected on for viral RNA detection and virus titration. Viral RNA was not detected in any organs or tissues collected from this dog. These results indicate that dogs have low susceptibility to SARSCoV-2. They also investigated the susceptibility of pigs, chickens, and ducks to SARS-CoV-2 by using the same strategy as that used to assess dogs; however, viral RNA was not detected in any swabs collected from these virus-inoculated animals or from naïve contact animals. Additionally, all the animals were seronegative for SARS-CoV-2 when tested by using the ELISA . These results indicate that pigs, chickens, and ducks are not susceptible to SARS-CoV-2. 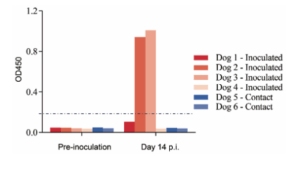 Figure 1. Seroconversion of CTan-H-inoculated and contact dogs. Six-week-old beagles were inoculated with 105 PFU of Ctan-H. Uninfected animals (contact) were housed in the same room with their infected counterparts to monitor the transmission of CTan-H. Sera were collected from animals before inoculation and on day 14 p.i., and antibodies against SARS-CoV-2 were detected by using a Double Antigen Sandwich ELISA kit (ProtTech, Luoyang, China). Optical density values of greater than 0.2 were considered positive for seroconversion according to the manufacturer’s instructions.

In summary, ferrets and cats are highly susceptible to SARS-CoV-2, dogs have low susceptibility, and livestock including pigs, chickens, and ducks are not susceptible to the virus. The fact that SARS-CoV-2 replicates efficiently in the upper respiratory tract of ferrets makes them a candidate animal model for evaluating antiviral drugs or vaccine candidates against COVID-19 .Surveillance for SARS-CoV-2 in cats should be considered as an adjunct to elimination of of COVID-19 in humans.